I flew back home with Emirates Airlines’ flight from Los Angeles to Dubai. At 16.5 hours, the flight is one of the longest non-stop commercial flights in the world today.

I landed in Dubai around 1300 and was met at the airport by my wife Delanii, a good friend Hazem and a couple of photographers from a local newspaper.

The photographers created enough attention that one of the airport workers approached Hazem as we headed out for the taxis, asking who am I, which I thought was hilarious!

At home, Delanii had prepared a Finnish flag out of candles, which looked beautiful! 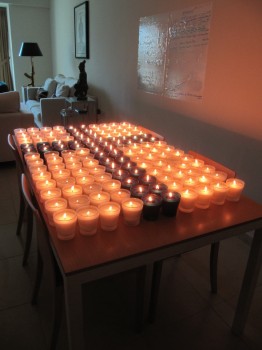 Setting the record straight about Denali