After an early breakfast, our expedition team was ready to leave for a six-day, 100km trek through the jungle to Carstensz Pyramid.

Our team included five western climbers, expedition leader Meldy, head guide Poxy, assistant cook Martin and 26 porters – a mix of men and women with even two young boys as well as a baby. The baby belonged to John, the head porter, who also had selected both of his wives as porters. 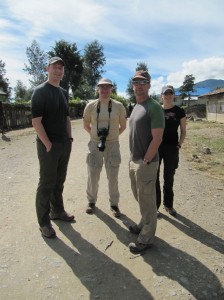 Outside our “hotel”, we were met by approximately 20 motorcycles and scooters, which drove us through the village to the start of the trek, escorted by a single policeman from the village – supposedly in case trouble broke out as we crossed land belonging to the various clans.

However, before reaching the intended destination, one of the local clans blocked the road, demanding money for us to cross their land – because none of their people had been picked as porters.

The village policeman handled the negotiation with the clan who were carrying a variety of weapons ranging from rifles to large knives as well as bows and arrows.

After no agreement on an acceptable fee was found, we had to turn back and return to the house we had spent the night, while our guides called the trekking company to discuss the situation.

This left our climbing team a chance to wonder around the village and build some goodwill with the villagers. 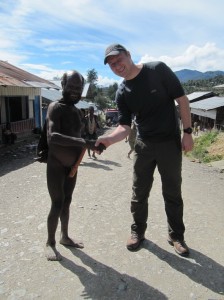 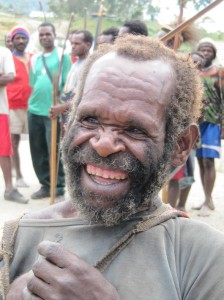