Standing Up for Finland

I attended the launch of Infiniti FX Vettel edition in Dubai tonight, as part of the build-up to the Abu Dhabi F1 Grand Prix on Sunday.

Infiniti is one of the sponsors of Red Bull, so the event included a strong Red Bull flavour with test driver Sebastian Buemi racing on a simulator against 30 pre-screened “drivers”.

Former F1 driver and current Sky Fi pundit Martin Brundle was also in attendance. During a Q&A session someone asked Martin for his opinion on the top drivers currently in F1 and he listed Alonso, Vettel and Hamilton as his top 3. 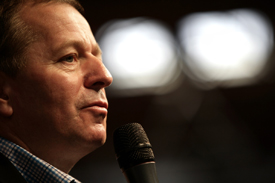 This obvious mistake forced me to corner Martin afterwards and ask him what about Kimi Räikkönen, which led Martin to concede that if all the F1 drivers had the same car, the difference between the +20 drivers on a lap would probably be less than 0.5 seconds and that it would come down to which driver manages to work with the team to optimise the car for their driving style.

So there you have it, it’s all about the equipment, unlike the mountains