After breakfast, nurses arrived to draw blood from Delanii. The tests results showed nothing new, including no malaria!

With Delanii’s condition improving, I appealed to the doctors and nurses to try to “free” Meldy from the container at Balidan and get him brought to the hospital as he was also sick. However, I was simply told to look after Delanii and forget about our expedition leader.

In the evening, a janitor noticed that the VIP room had two “guests” and brought in an extra bed. I’m happy to be finally off the floor! 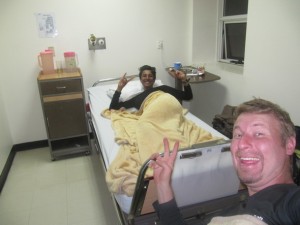 At 2130 in the evening, two ladies in civvies showed up stating that they’re from the hospital administration and needed us to pay the bill for their services in cash. They also told us that we would be leaving Tembagapura on the first flight tomorrow.