Today we had another acclimatization day with a hike to Pastukhova Rocks at 4800m. Rob, Neil, Dave and Wilf decided to hike all the way up to the rocks while Gennadi, Dan, Tim, MJ, me and Delanii took a snowcat to Prius Hut and hiked from there. 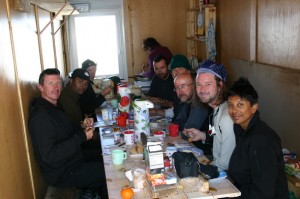 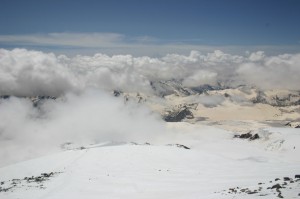 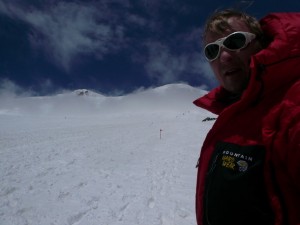 At approx 4700m, Delanii and a teammate started showing mild signs of Acute Mountain Sickness (AMS), so Rob told them to stop, rest, rehydrate and eat, while the rest of the team carried on.

After enjoying a rest and some food at Pastukhova Rocks, we headed down and reconnected with Delanii and the other climber. On the way down the group split up again and after a while Delanii and I came across the teammate walking erratically. We quickly recognised that the AMS was getting worse and decided to walk him quickly off the mountain

At the barrels Rob concluded that our teammate had a bad case of AMS and decided to evacuate him off the mountain to the village at 2300m, while the rest of the team stayed put. Later, Gennadi decided to go and see his friends and left us to our vices at the base camp.

Sleeping next to “world’s nastiest outhouse”

Resting ahead of summit push